skip to main | skip to sidebar

This guide will be helpful for any experienced MMORPG gamer wanting to denoobify themselves quickly. It should help fast-track your exit from noobdom by explaining the differences between Eve and other MMOs, particularly World of Warcraft.

I use simple language and cut to the chase, assuming you can game.

April 2010: I'm looking for a help to find any remaining inaccuracies and fix the posts. Posted about this on Tobold's blog.
About the guide
The content is up to date for Revelations II, and should be updated for Trinity.
Read the guide pages (navigation on the right) for the main content, plus you will find additional tidbits in the comments at the bottom. I delete any comments which are misleading, and upgrade my main content as necessary.

I just read someone joking that 'Eve has a near vertical learning curve'. Pretty funny; it has some truth to it. I honestly think my guide softens that curve significantly.

Keep reading this page to understand new character choices and how skills work.

Character creation, 'levelling' and other day-one questions
Levelling
Does not exist as we know it. You do not gain experience from kills and quests. You gain skills by simply choosing to learn. You continue learning that skill as time passes, whether you are logged on or not, at a rate of about 800 skill points per hour for a noob.

In WoW, your levelling speed is limited by how efficient you grind and quest.
In Eve, you gain skills at the same rate as any other noob. How many points per hour you gain are determined by your attribute points - intelligence, perception, will power and so on.

The skills you can learn all have five levels. If you have no skill in say Rapid Firing at all, it doesn't appear on your character sheet. Going from level 0 to I might require 400 points, so you can do it in 30 minutes. From I to II might be a little over an hour. Going from level IV to V can take a week. You'd just set it to learn and then do whatever you'd like to in-game, perhaps mining or missions. 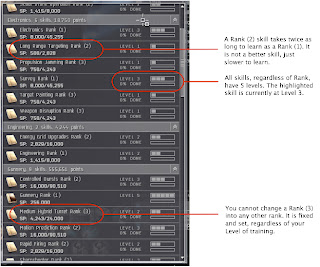 Skills have ranks which tell you how quickly that skill is learned. Ranks do not mean a skill is better or worse than another, just that a Rank 4 will take four times longer to learn than a Rank 1. Even if you are a level V (that's five) in Gunnery Rank 2, you can't change its rank. It's fixed. It just means it is slower to learn than a Rank 1 skill like Gunnery.

Level 70!
There is no level cap. After playing Eve for a long time, you might have millions of skill points. You will see people describe themselves as having "15 mil SP" for example. Those points would be spread across many skills, most of which they purchased via the market and trained up over many real-life months.

You don't suck compared to old pilots
Many new pilots look at the older players who have 5M, 15M, 30M or more skill points (SP), and think "I suck, I can't compete". This is totally wrong. Some reasons why:

Talents
Eve doesn't have talents like Warcraft but there is a slight similarity in the way the skills have dependencies. You cannot 'respec' in Eve; you just continually build up new skills.

When you start a noob character, you will be given about 800000 skill points spread across a range of skills. They're all like tier 1 talents. A more advanced skill will often require that you have a certain level of skill in a lower tier skill. For example, Rapid Firing can't be learned until you have Gunnery II. (That's Gunnery level 2).

You find new skills in the Market. They're for sale. You don't go to a trainer.

Skill tree
There is no really satisfying way to browse the various skills available in the game, except with this must-have software EveMon. (There is an in-game setting to show all skills on the Character sheet but it's cumbersome to browse). EveMon lets you search the skills, see a diagram of its prerequisites, what items you can equip once you've learned it, and more. You can build a plan of what skills to learn over time, and thereby plan your career.

EveMon is like a talent builder in WoW, merged with an item database like Thottbot, on steroids.

It's so good, it really should be bundled with the game. Be sure to only download it from the official website though, to get the right version, because it can use your login details to download a complete copy of all the skills you've already learned.

In-game you can find what skills a ship or weapon requires before you can use it on a tab describing the item. This lets you see, for example, that to fly a Battleship you first need to learn Frigates to level IV, then Cruisers to IV and Spaceship Command to IV. This would take at least 14 days of training.

Creating a new character
Race
Which race you choose determines which ship types you start off with. You can learn another race's ship skills later on if you want. Each race's ships has a bias: Caldari use missiles, Gallente use drones. All races have ships of every type such as freighters, battleships and surveillance, so you can't miss out by picking the 'wrong' race. While some racial ships are slightly better in certain situations like PvP or PvE, you won't be screwing yourself up by picking one over another. (See this section of my blog for more detail).

All player races can talk to each each in 'whispers' (called conversations in Eve), can join one another's Corps, and kill each other in PvP. The races are a storyline mechanic and set your initial ship skills (because each race has its own set of ships), that's all.

Starting skills
New characters you create get a distribution of about 800K skill points. This is the equivalent of having trained for about five weeks non-stop. In the interests of saving yourself time learning other skills, it's smart to pick a character which you guess will suit your gaming.

School
The school and specialisation you pick will determine how your initial skills are spread out, but most importantly it will set your Attributes.

It's a pretty hard decision. If you're not sure, pick a soldier or special forces character.
This detailed page on my blog shows you the initial skills resulting from each of the race and career choices you can make.

Attributes
Attributes determine how fast you learn skills of a certain type. Attributes are more important than which skills you start with. It's wise to try for a balance between the attributes, and to ignore Charisma. If you intend to be a serious pilot, you can bias towards perception.

Gunnery skills require perception and will power. If those attributes are high (like a score of 12 or more), you will learn a level of say Rapid Firing in three hours, whereas it might be four hours if they were low. It varies: drone skills use memory and perception, skills required for combat, such as fitting armour or using electronic jammer, require intelligence.

You can increase your attributes with the category of Learning skills. You should do this. You will need to buy a few from the Market. You can also buy implants like +1 which cost about 150K ISK, and +4 which cost about 250m ISK.

If you have a skill training plan worked out in EveMon, it will estimate how long in total it will take. You might have 30 or 40 days' of training worked out,covering dozens of skills. Higher attributes could chop off as much as three days.

Tutorial
You should do the tutorial because it's fairly fast. (Note: Eve is the version 'Trinity'. Tutorials from earlier versions (Revelations I & II) took a lot longer than it does now. Old pilots might not distinguish them if you ask). Even in the days when the tutorial was really slow, it was vitally important to play through the whole thing - not only did it teach you a lot about how to operate your ship and the economy, but it gives out some items that can be used to get access to some rewarding missions.

What to read next?
Bookmark the site, first.
The guide can be read in any order.

I'm looking for a new maintainer for this guide, to freshen it up for current content. Email me at hammerjudge@gmail.com
Also I'm now playing WoW again, and have a guide on leadership and tanking called pwnwear. Drop by!
Update June 2009: changed template, fixed dates on posts so they appeared in one line. Also posted on scrapheap requesting help.
16 comments: